The Call of Nature 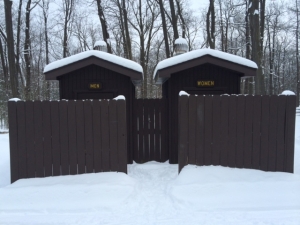 It is simple, primitive, and essential. It’s a wooden box with a latch. It’s a deep (I hope) hole. It’s equipped with TP and antibacterial gel, except when it isn’t. In summer, it’s a 95 degree Petri dish for bacteria and home to any number of insect larva. In winter, it’s a sub zero cryogenic chamber with a toilet seat. It is much maligned and known by an assortment of indelicate names. We fear it, we hate it, we need it.

Tom and I hiked at Laurel Summit yesterday, and because I knew that I had 5 miles of gorgeous scenery in front of me, I first headed toward the snow covered “necessary room.” Funny thing, I noticed that more tracks led to “hers” than led to “his.” Go figure. The door stubbornly gave way to the fresh 6 inches of powder from the night before. The “skylight,” which is an imaginative name for Plexiglas thrown over the hole in the ceiling, was also blocked by the 14 inches of snow on the roof. So I inched to the Siberian metal seat under the cover of darkness. Walt Disney could have stood right beside me in his frozen state and I would have never known.

The outhouse is a not-so-subtle reminder of the differences in the sexes. (Apparently transgender people have to squat in the snow because there’s only two choices in the park.) These differences (even the plumbing!) are part of the plan, God’s perfect design. The bright yellow paint signaling “men” and “women” is a sign that everything is as it should be. We are made for a purpose and our gender has something to do with that. While so much of the world is trying to sand down the differences, Christians have something to embrace here. We know the Author, we know His Story. We know that in male-ness and female-ness, God wants to show us something about Himself. We are created, male and female, in His image. Designed to be different, designed to be diverse, designed to be one.

So next time nature calls, rejoice in the differences and be thankful that there’s a “loo” on the trail.