RSS
← Time For A Confession
Who Wrote This Map Anyway? →

It’s in all the local papers. Mr. and Mrs. Bald Eagle from Hays in Pittsburgh have just laid a third egg in their big-ass nest. This is the second year in a row that the eagle couple has chosen to raise a family within the city limits of Pittsburgh. Last year, one egg hatched and fledged. The last time this happened was over 150 years ago according to the “eggsperts”. 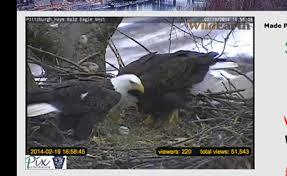 Like most of the traffic on Route 19, their Hays area nest is now under 24 hour surveillance by remote cameras. If anything suspicious happens, it will be on film. I am enthralled with the return of the eagles and love to see them flying overhead but watching the live feed is much like watching Olympic Curling. You know it’s supposed to be interesting but you are not sure why. Click the picture for the link to the big event where egg number 1 is seen for the very first time. Find the frame for “first egg laid, 2-19-2014.” The first 2 minutes are cool. After that, it’s like the 6th End for the Great Britain Curling Team…just not really going anywhere. (http://www.pixcontroller.com/eagles/)

Tom and I will be heading over to congratulate the lucky new parents this weekend. Sadly, they have declined our invitation to join us for dinner afterward at the Hofbrauhaus. (If you visit along the trail, you’ll notice a sign insisting that you keep your voice to a whisper so as not to disturb the love birds whilst nesting. Apparently human voices might drown out the sounds of trains, traffic, construction vehicles, and barge horns that eagles love so much.)

Posted by Amy Scheuring on February 26, 2014 in The Hikes

← Time For A Confession
Who Wrote This Map Anyway? →

2 responses to “Urban Eagles and Curling”